Why Should You NOT Join a Singing Competition TV Show?

Every year, tens of thousands of artists rush to register to participate in a tele-hook such as The Voice.

But is this enthusiasm really justified? Is it even desirable for so many aspiring artists to decide to take their chances on TV?

In concrete terms, should YOU participate in this type of program?

I’m not so sure and in this article I give you several reasons NOT to participate to The Voice!

5 Reasons Not To Participate to a TV Singing Contest

1. The real winners are not the ones you think they are

We all know them (unfortunately?), these artists who have gone from the shadows to the light in a few months thanks to their participation in a TV show.

Since the early 2000s, this sudden celebrity has inspired hundreds of thousands of amateur singers to follow the same path. Is it a success? Meh.

For an artist who will gain lasting visibility thanks to this type of show:

If we assume that only one in 10,000 singers will be successful, the real winners of this type of show are obviously to be found elsewhere.

First of all, there are the TV channels. This is a very good financial windfall both in terms of advertising revenue, sponsorship and the jackpot of premium calls and SMS (public votes).

But the biggest poker move is the one of the majors (Universal Music in the lead) to whom we offer the largest and most formidable market research possible on a national scale.

Imagine: for dozens of weeks, millions of potential buyers are presented with “samples” of artists.

The public will then become attached to some and eliminate others, only to end up with the one who appeals to the greatest number of people becoming the product of a huge company in search of immediate profits.

All that remains is to release an album and produce a tour to make all this profitable. So, happy?

Be careful, I’m not here to criticize the capitalist system or the omnipotence of these labels. I just want you to understand who you are really talking to.

2. You don’t control your image

A hook and loop is mostly entertainment.

The primary goal is not to put yourself forward (especially if you don’t reach the final stages), but to “entertain” the viewers.

What about art and the artist in there?

This is quite secondary and that is why it is strongly recommended that you sign a contract at the outset stating that you waive several of your rights, including the possibility of turning against the production.

As a result, we can do whatever we want with your image, without your permission and you can’t say anything. You play by their rules.

If they manipulate your editing interventions in order to make you look like something you’re not or to amplify a trait, too bad for you.

3. It is only a stepping stone, not a career objective

These entertainment programs are so popular that we forget that they are only “musical stepping stones”.

This does not replace a career.

The music industry is not how it works and we should never believe that TV shows are the norm to succeed.

It is absolutely misleading and deceptive to suggest that this adventure is self-sufficient.

And as proof, not all winners are successful and famous. Many are the ones who return to a normal life because they were unable to transform the trial.

4. These programs propagate misconceptions about music and industry

Let us stop for a moment and ask ourselves a question. Should music be a competition?

No matter what your intentions and values, these programs will always promise you fortune and fame in exchange for fierce competition. In real life does it work like that?

From what I have seen, music is a place of exchange, sharing and collaboration. A conversation, not a fight.

This pseudo-meritocracy is only intended to create greater challenges, especially for the spectator, who is given the role of judge.

So only absolute victory really matters. If you do not finish first, you will be forgotten two to three months after the end of the show.

But then how do we determine if one deserves to win more than the other?

We differentiate ourselves or we innovate. And it can quickly escalate to extremes to capture attention and become memorable.

After all, these shows also convey the idea that to succeed in music you have to be a star, a celebrity. At least, that’s what we promise the big winner.

But the truth is that in the end you are known more for your media coverage than for your art, your music and your universe.

Is that what you want? Appear in people magazines to sell your music? It’s up to you to see what you want to be associated with.

Because winning one of its programs is a label that you will keep for a very long time and that will be difficult to get rid of.

In any case, you should know that you can live off your music without being “famous”, if that’s really what you’re looking for.

5. There are many other ways to succeed in music

Let us be honest.

If you want to participate in this kind of shows, it is indeed to realize your dream: to become a professional artist.

And there is absolutely no harm in wanting to take a shortcut, get famous and become fundamentally mainstream.

Today you can live your dream without a TV show, without a label and without a manager.

It is as much as possible and it is the path that more and more musicians, singers and groups decide to take.

The biggest difference, however, is that it requires much more work and investment.

Where you would only have to worry about your stage presence and voice in one of its programs, as an independent artist you will have to step back from your project, act instead of begging and train yourself directly in the tools and techniques that work.

It takes work, but it is far from impossible.

It all depends on your objectives, your ambitions and your ability to overcome failures. 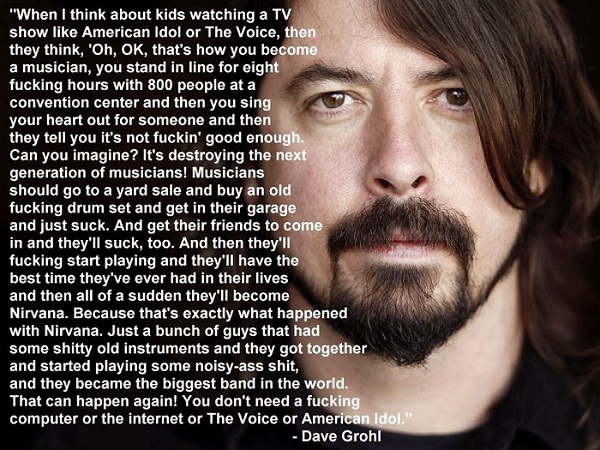 I would ask you to consider all the points mentioned above and not to be naive.

Some professionals are looking to exploit your dreams and passion and chances are it will lead nowhere.

However, if you understand that this is not the only way to succeed in music, if you take a step back, if you have a long-term strategy and if you think that it can be a challenge and/or an interesting gain in visibility for your career, then go for it.

In all other cases, don’t waste your time and learn today how to really make a career in music.

The Mindest of the Starving Artist Kills Your Chances of Success

How to Write Songs That Are Memorable?