Do we really have to be Young to break into the Music Industry?

Today we are going to talk about a sensitive subject, that of the age needed to break into the music industry.

Indeed, this is an issue that comes up again in the mouths of many developing musicians, nervous about missing out on their careers.

Is it too late to succeed?

Will the music industry want artists over 30 or 40, when on the other side we have Justin Bieber, One Direction and Lorde?

We were conditioned to think that to succeed in music you have to start young and break through quickly, and it’s not with shows like The Voice Kids that they’re going to make us forget that.

So if we have few results at 25 or 30 years old, we start to think that it is not for us or that we are getting too old. Is this justified? Not really.

Your age does not define your success

It is true that youth, like physical appearance, is an important factor in success in the pop music business.

Does that mean that you have to give up everything if you are not known until you are 30? Not at all.

So many artists took off even though they did not necessarily fit the typical profile of a new music star:

Here I give you only a handful of them, but there are thousands of artists who have only found their musical style, recorded their best songs or reached the peak of their careers after well over thirty.

What are you really looking for?

With the Internet, home studio production, the disconcerting ease of creating and sharing video content, or the global distribution of your titles in a few clicks, you are as likely to live off your music if you are 67 as if you are 17.

Of course, here I’m not talking about becoming the new popstar of the moment.

What I am saying is that it is now within everyone’s reach, at any age, to conquer its musical niche and to monetize its fanbase in a sustainable way.

Does this fit your definition of success? If so, then so much the better, because age has nothing to do with your success, your fans care more about your music than your wrinkles.

Look at David Guetta, who is almost 50 years old and still has clubs, festivals and an audience at least half his age.

But if you’re looking for fame first and foremost, I can’t hide the fact that becoming a world star will be a whole different matter.

I therefore invite you to define what it means to succeed in your artistic project, because it may well be that no matter what your age, it is always possible.

It’s not too late to realize your dream, but you have to stop looking at the music industry the same way you did 10 or 20 years ago.

Because if you play by the old rules, then you won’t be able to move forward.

Your fans are waiting for you, but for that you have to try new things and stop with excuses, whether you are 30, 40, 60 or even 80 years old.

Anything is possible, so go for it.

​Sign up via the form below to receive our ​BEST recommendations for independent musicians & ​EXCLUSIVE discounts:

How Non-Exclusive Licenses Work In the Music Business

Here’s How Much Apple Music Pays You per Stream 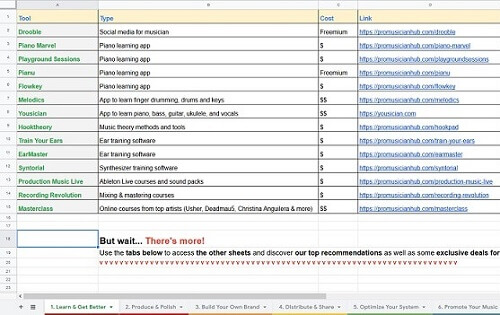 ​The Toolbox includes PMH's ​#1 recommendations and exclusive deals ​to: