Melodics Review: Best App to Learn to Play Like a Pro Musician?

​If you’re looking for a simple comparison, then perhaps you could describe Melodics as a Guitar Hero-like desktop app for drummers. The app works with controllers such as Maschine and Ableton Push. It features tons of lessons and tutorials, some provided by Melodics and others devised by Melodics users.

If you want to perfect your timing, understand beats, or simply learn drum pads and such from scratch, Melodics is one of the best tools at your disposal. Here’s everything you need to know about the app.

​👉 Click here to Learn More about Melodics and Try it for FREE!​

The app was developed by a New Zealand-based startup with the same name. The first iteration of the app when it launched in 2015 was very drumming-centered. These days, the app has evolved and now also offers tutorials, lessons, and tests for keyboard players, not to mention the numerous interface and latency improvements.

What to Expect from Lessons

Lessons come in different grades of difficulty. For Melodics Keys, which is for keyboard players, the lessons are graded from level 1 through 16. They start with simple chords and move up to complex arrangements.

Each user gets access to 60 lessons out of a total of around 500. The 60 initial lessons are free while the others are gated behind a $9.99 monthly subscription. However, of those 60 free lessons, only 20 are available for Melodics Keys. The other 40 are split between Melodics Pads (pad drumming) and Melodic Drums (electronic drums).

One thing of note is that keyboard lessons aren’t as well designed as a whole as pad lessons. Seeing as this is a rather new addition to the Melodics platform, the reviews are still split.

There are certainly accessible lessons for beginners, but intermediate players might have a better time using Melodics Keys. The reason for this is simple. The learning curve can be steep if you have no prior experience.

Drumming lessons or pad lessons, on the other hand, are still the bread and butter for Melodics. The entry-level lessons are generally simple and require only two fingers to hit a simple 4/4 beat using a kick and snare drum.

Basslines for many genres such as trap, hip hop, electronic, etc. are easy to follow. Are they always easy to understand? – No. But that’s one of the goals of Melodics anyway, helping you to understand what you’re doing.

But how complex can the lessons get anyway? – Some of the content can be intimidating. Keep in mind that there’s a lot of creativity in new age music production. Melodics seems to emphasize things such as techno basslines, house progressions, and other synth-related arrangements.

The Goal of Melodics

The concept and goals behind Melodics have been explained by CEO Sam Gribben and various artists who have contributed to the app on numerous occasions. Melodics is not designed to replace real-world practice and taking lessons from experienced tutors.

Melodics is more focused on helping musicians understand the basics of “make your own music.” And, it’s also focused on teaching certain musical styles, beats, the importance and the feel.

Another thing that’s often reinforced by the CEO is that Melodics tries to help musicians develop good playing habits. Because the progression is rather slow but at the same time enjoyable, users spend more time learning and practicing the fundamentals and are less inclined to skip important playing habits. 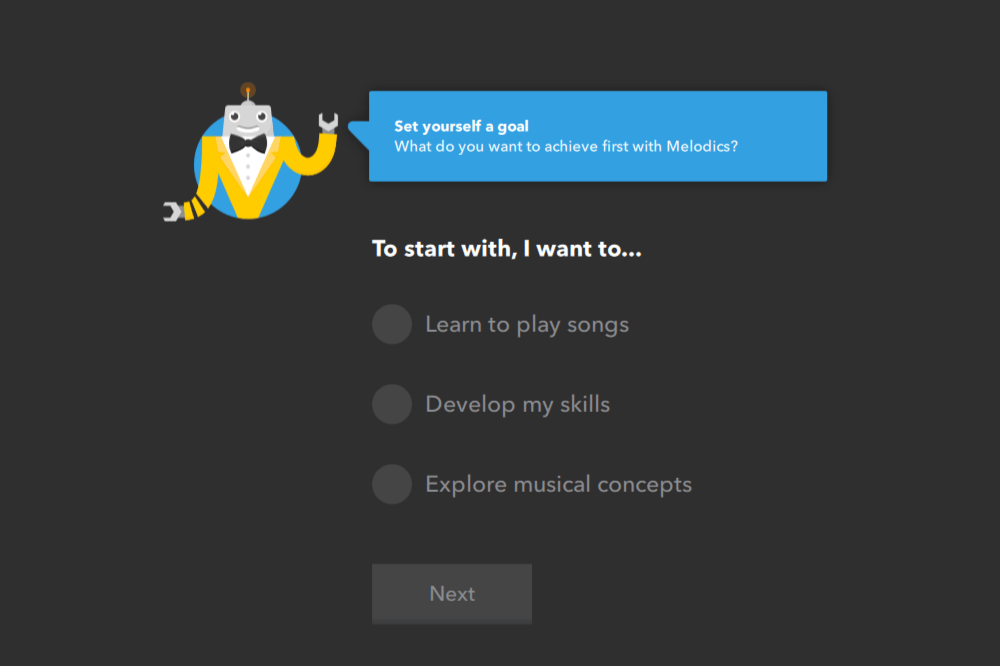 On Melodics’ official website, you will notice well over 20 musical genres covered in the lessons library. You have the familiar genres such as pop, rock, hip hop, dubstep, funk, reggae, and others.

And then you will also find niche genres such as trap, ambient, chill, afrobeat, deep house, and the other roads less traveled. Obviously, the breakdown favors the popular genres. There are some genres that have only one or two lessons as opposed to 10 or 20.

But, as the community keeps growing, the number of lessons is also slowly growing. New genres are added and old genres revisited. And, if you’re interested in learning about the less mainstream music, how to play it, and how to arrange your own pieces, Melodics can give you a nice introduction.

Taking Practice to Another Level

Practicing your drumming or piano skills in Melodics has a game-like quality to it. Again, this is where you’ll notice that similarity to Guitar Hero. There are various lessons that have complex on-screen feedback. And, you’ll also get rewarded with achievements that boost your confidence and give you bragging rights over less-developed musicians or friends.

Combo streaks, missed notes, timing, completion ratings – these are all things that should sound and look familiar if you’ve played the console guitar. Not only does a good rating or huge combo streak act as confidence boosters but they also make practicing less boring.

And, the reason we’re using Guitar Hero as opposed to Rocksmith in this comparison is that short of using electronic drums, you will be using controllers and not real instruments to plug and play. However, clearly there are the familiar game-like interface, customization, and feedback.

Melodics is compatible with MIDI pad controllers, MIDI keyboards, electronic drums, and keyboards. On the app’s official website, you’ll be able to see a list of pre-approved and pre-mapped MIDI controllers. Just about every major manufacturer is on that list.

Each note displayed on screen will feature a certain color, depending on how well you’ve played it. Green means that you’ve hit the note with perfect timing and length. Orange and purple are used to show early and late notes. Red is the indicator for missed notes.

There are two more colors that denote which hand you should play the notes with. Blue stands for left hand and yellow for right hand. 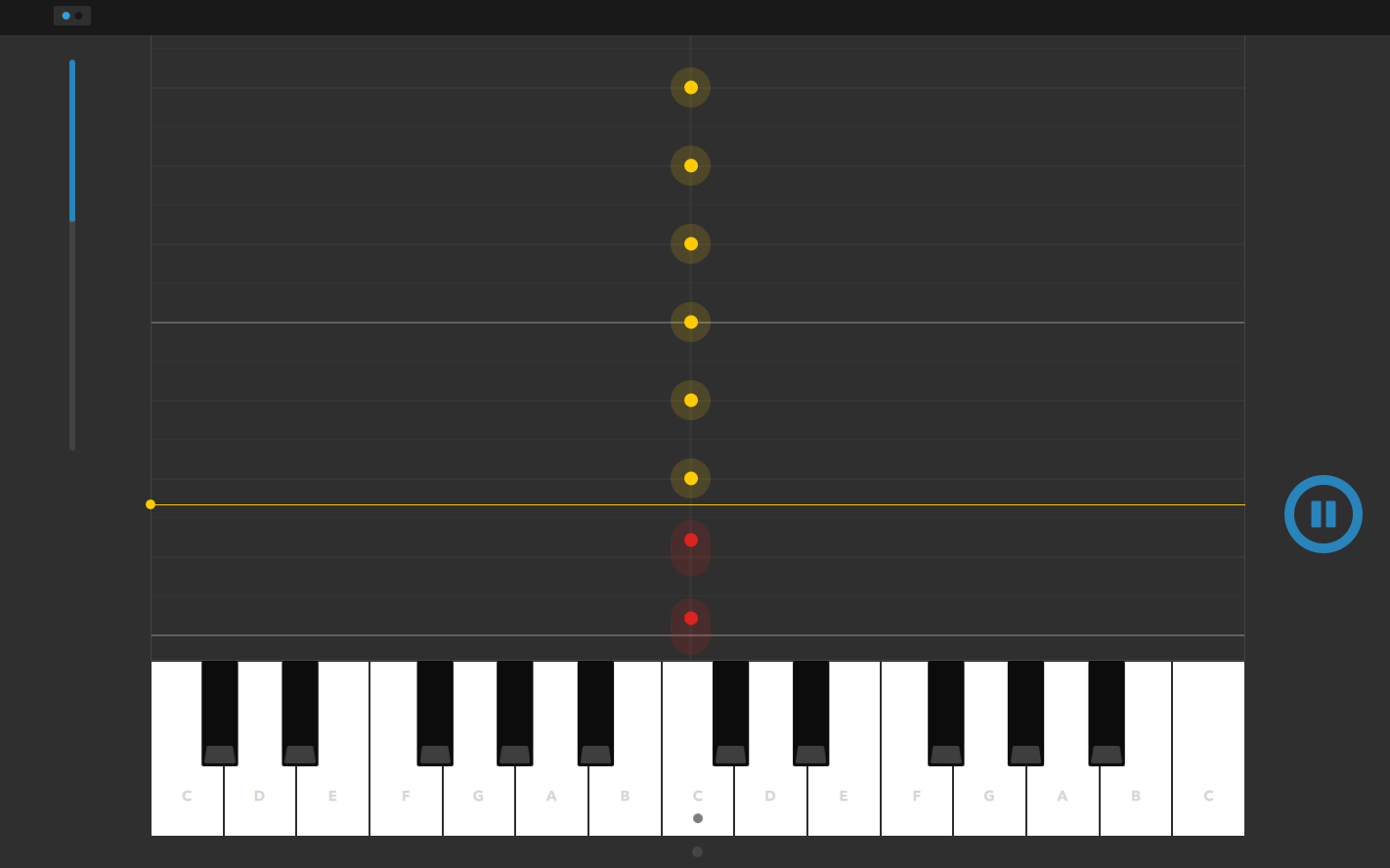 Before you start playing along to a track, you have the option to preview the audio. This is done from the pre-play screen. This gives you a sense of the feel of the track at regular speed. Additionally, if you have an officially supported controller, as each note is played the corresponding pad or key should light up on your controller.

You can also view the musical arrangement before starting a lesson. You can scroll up and down and get an idea of which hand you’ll have to use more often or what scales are emphasized. The arrangement preview is recommended for complex lessons.

Simply scroll up and down before hitting the play button.

When you’re playing along to a track or following a lesson fluently, it’s called being in performance mode. Melodics also offers what’s called a practice mode. From this interface, you can set audio loops and change the BPM. This will allow you to tackle complex lessons or work on specific arrangements that you find difficult.

There’s also an Auto BPM mode which would start up the track at a slower tempo and analyze your playing accuracy. As you improve your playing, the BPM increases in increments of 10 BPM until you reach the natural tempo of the track.

Melodics is designed to work with an internet connection. So, if you’re often on the road, it may seem like the app isn’t offering a lot. Well, if you want to practice at all times, you can download a few of your favorite or the most challenging lessons and use Melodics as an offline tool.

You still get on-screen feedback and your progress is saved. Once you reconnect to Melodics, your offline progress will be uploaded to the servers and your rating will change for better or worse, depending on how you fared.

Can You Use Melodics as a Revenue Stream?

So, where does all that money from subscriptions go towards? Part of it obviously goes to the app developers. However, a good portion gets distributed to the artist contributors on the platform.

Many musicians, the majority of whom are DJs or music teachers, created the lessons found on Melodics. Now, there’s no current program which allows you to create or monetize created lessons.

However, the team is always looking for experienced musicians and most importantly, experts in certain instruments such as drums, piano, and bass.

If you have any ideas on how to improve certain lessons or how to teach something that isn’t currently found on Melodics, you might be able to convince them to take you into consideration as an instructor or contributing artist.

Then, if your lesson is streamed enough times, you’ll get a good percentage from the subscription revenue.

By far the most expensive piece of equipment needed to enjoy Melodics is the controller. The app runs on very low-end systems, and even at the minimum specs, there is little latency to worry about. Here’s what you need to run Melodics:

With that in mind, a more modern rig wouldn’t be a bad idea. If you’re running the app on minimal requirements, you have to realize that some animations and features will have to be set at minimum settings.

Generally, this shouldn’t impact the sound quality too much. But it can make using the program seem less interesting. Besides, if you’re going to be making music for a living or even as a hobby, most recording and production software needs a decent modern rig ... or better yet, a capable workstation.

Melodics features a subscription program. It costs $29 per month to get access to all the lessons and features of the software. Now, not all users are pleased with the software for service business model.

That being said, for someone that wants to learn two instruments and different music styles, $29 is a small price to pay for 30 days of practice, given that you can use the software for as many hours in the day as you want.

Just compare that to the cost of taking weekly music lessons from an established music teacher. Most of the learning depends on you practicing at home. The most that an instructor can offer you is some hands-on tips and tricks and music theory explanations.

Developing your skills is something you do on your own. With Melodics, you get the best of both worlds at a bargain price. Not to mention that you also get a free trial period where you can experience the performance and practice modes and get a sense of the difficulty of the lessons.

Remember how Melodics is supposed to make practicing fun and accessible? Because of this, it also offers educational licenses which are heavily discounted. If you’re interested in becoming an educational partner and using the Melodics app to teach your students, then the app suddenly becomes more appealing.

Another cool thing is that once you download the Melodics app, you can switch between instruments. You don’t need three different apps to use Melodics Pads, Melodics Keys, or Melodics Drums. They’re all part of one app.

Is Melodics Right for You?

There are many people that can benefit from the Melodics app. Drummers, keyboard players, people interested in creating music with their MIDI pads (DJs). The concept is tailor-made for beginners and people with MIDI controllers.

If you’re an experienced musician, chances are the software is not worth more than one month’s subscription to you. Although it’s been around for a few years now, even the advanced lessons library is quite tame.

And, if you already know how to play, you won’t need a guided software to help you practice. At the end of the day, Melodics will always be great for learning the basics and developing some finger and hand dexterity.

But, if you want to reach a certain level of skill, you may have to look past subscription-based teaching software.